3 Art Works About Being Broke, Frugality and Moving Past That 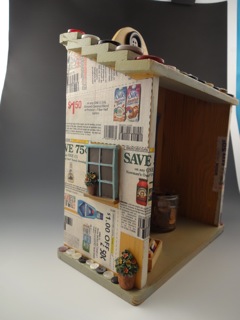 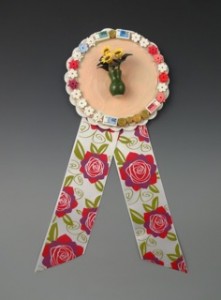 Have you ever been broke, working hard to pay off debt and just worn down? In 2014, I made these medals, (above and below) about being tired of it and my wish to, as the titles say, “be able to buy flowers at the grocery store without thinking about how much they cost.” 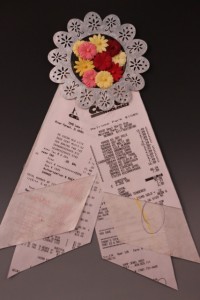 Apparently, I really, really wanted to express this idea, since I did it twice. : ) In 2015, things began to look up and I did lots of thinking and reading about moving toward an abundance mindset. Naturally, I wanted to make art about that, since that seems to be how I process things.

Here’s Our Lady of Perpetual Frugality: 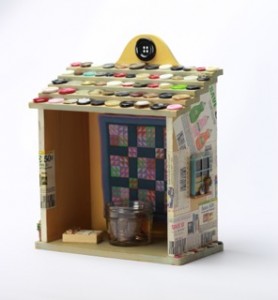 That’s a penny jar on the inside of the little house, which is covered with buttons and coupons. Frugality is a good thing, it means to get the most use out of a thing, but can you take it too far? Time spent clipping coupons (not something I do, actually) means that’s time you’re focused on lack.

The saved buttons represent all those buttons we save for a rainy day, but never use. The “extra buttons” that come with new clothes that we stuff in a drawer, but can never find when we actually lose a button.

I have a whole bag of those extra buttons, from a thrift store or someplace, that the previous owner wrote on the little envelopes “red blouse,” this reminded me of something my grandmother would do. She lived through the Great Depression and didn’t like to waste.

Button House/Our Lady of Perpetual Frugality is my artwork in which I say, “thanks frugality, you’ve served me well, you got me through some rough times, but I’m letting you go. I’m buying flowers now, at the grocery store.”