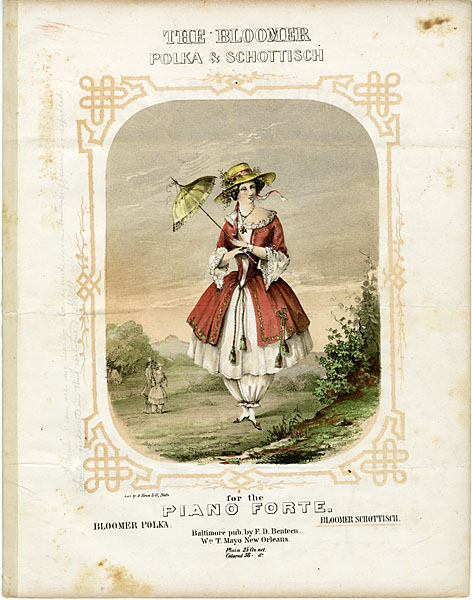 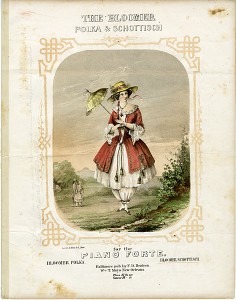 Amelia Bloomer didn’t invent the “Bloomer costume” but she did wear it, wrote about it and advocated for it. She said of the shorter dress worn over modest bloomers,

“The costume of women should be suited to her wants and necessities. It should conduce at once to her health, comfort, and usefulness; and, while it should not fail also to conduce to her personal adornment, it should make that end of secondary importance.”

Did you know that Elizabeth Cady Stanton wore “the costume,” as she called it, for a while? She loved it, as one imagines she would, since she was pretty busy writing speeches for Susan B. Anthony and raising seven children.

There was so much negative attention for wearing bloomers, that Elizabeth gave it up, so that it wouldn’t detract from her life’s work of woman suffrage.

Here’s a cartoon that gives you an idea about the cultural blow-back that dress reformers faced.

The idea is that wearing the Bloomer costume is just as un-ladylike as smoking.

I’m linking my campaign for Pockets for Women! to the original dress reform movement.

I’m tired of seeing ever-larger smart phones barely clinging to the back pockets of ever-smaller women’s back pockets.

Fashion designers have often said that they can’t add more pockets to women’s clothing because it messes up the lines, the appearance. Or that there isn’t room, because women’s bodies are filling up their pockets.

I challenge you, fashion designers! You can do better. You must.

My cell phone pocket, that I had custom sewn, is on my thigh. I point out that the thigh bone is the longest in the body. There’s plenty of real estate there to put a phone pocket.

Make use of that space, and other spaces, fashion designers of the world!

Give us real pockets, keep our phones safe! 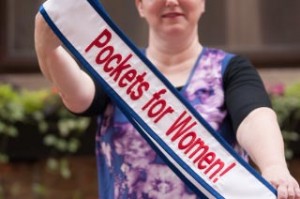 Source for the Bloomer Polka Image.