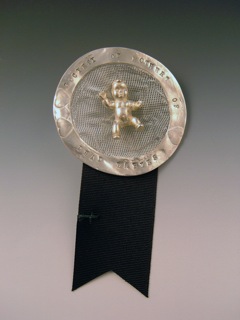 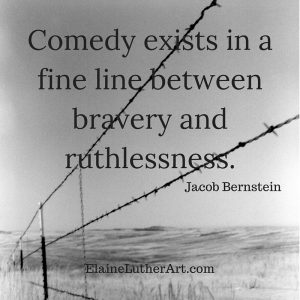 “Comedy exists in a fine line between bravery and ruthlessness.”

Film maker Jacob Bernstein said that in an interview on Fresh Air with Terri Gross, and I had to slow down on the elliptical machine at the gym so I could write it down.

See, I’ve felt for a long time that comedy and art have this thing in common. I’ve been reading biographies of comedians, autobiographies and listening to interviews with them for years.

I wasn’t quite sure what captured my interest so much.

Sure, I like stand-up comedy, but lots of people do and they don’t go read the autobiography of the guy they just saw do stand-up.

Gradually, I began to figure it out, the connection.

Comedy is about finding the truth and presenting it to you in a way that you can see it, face it more easily.

Comedy is sometimes about a therapeutic process for the performer — taking pain and transforming it into something others can connect with, be touched, laugh. 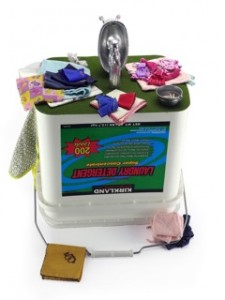 Art is that too, though maybe with a little less laughter. (Though many people’s first response to my Our Ladies of Perpetual Housework sculptures is to laugh, and I’m okay with that.) 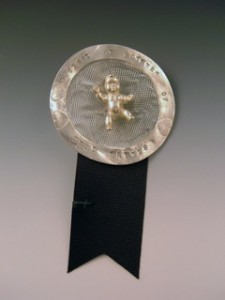 This is an idea that I’ve heard most clearly expressed by Paul Klein, formerly a long-time gallery owner in Chicago.

He’s said in speeches that when people see your art in which you’ve been vulnerable, they don’t think to themselves, “oh look, how vulnerable that artist is,” they think about how that connects to what’s vulnerable in them.

To put it another way, here’s something that came across my computer screen the day that Prince died:

“We don’t mourn artists we’ve never met because we knew them, we mourn them because they helped us know ourselves.”

It’s about Prince, but it’s relevant for any artist.

That’s what’s the same about comedy and art. Both are a search for truth. Both seek to connect with others. Both work better when we take risks and are willing to be vulnerable.

My medal, “Society of Mothers of Dead Babies.” hasn’t been shown in a gallery space for years. I decided I didn’t want to be that person, that mom, that artist any more. I didn’t want to show any art about my daughter who died. I began to feel that maybe it was exploitative to show the work.

But then, one of my podcasters told a story about his son being stillborn. And I wanted to share the image of that medal with him and with his wife. She and I are in the same club, this club that no one wants to be in, with this medal that nobody wants to earn.

I sent him a message to say I was sorry for their loss and also, would he show this work to his wife if he thought she might like it.

It was a reminder that maybe I made the piece just for me, but now it’s for the world. It’s for all the mothers who’ve lost a baby, it’s so that I can connect, in my vulnerability, with them. Or they can connect to my art, I may never see them, or meet them.

Born Standing Up by Steve Martin

Sick in the Head by Judd Apatow