How All My Art Goes Together 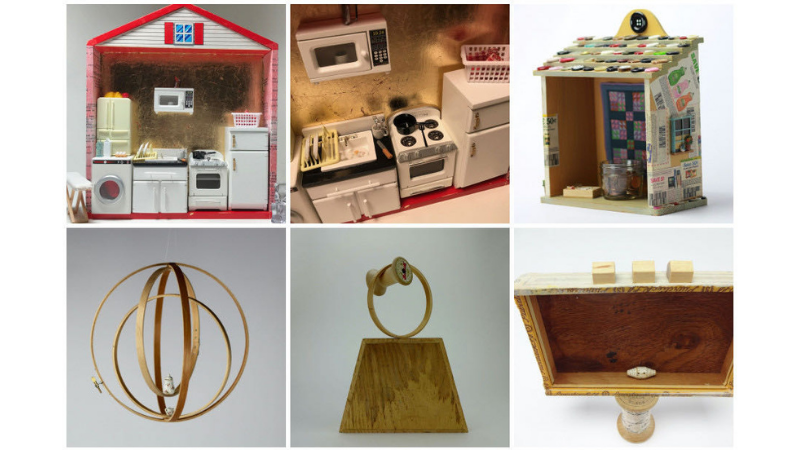 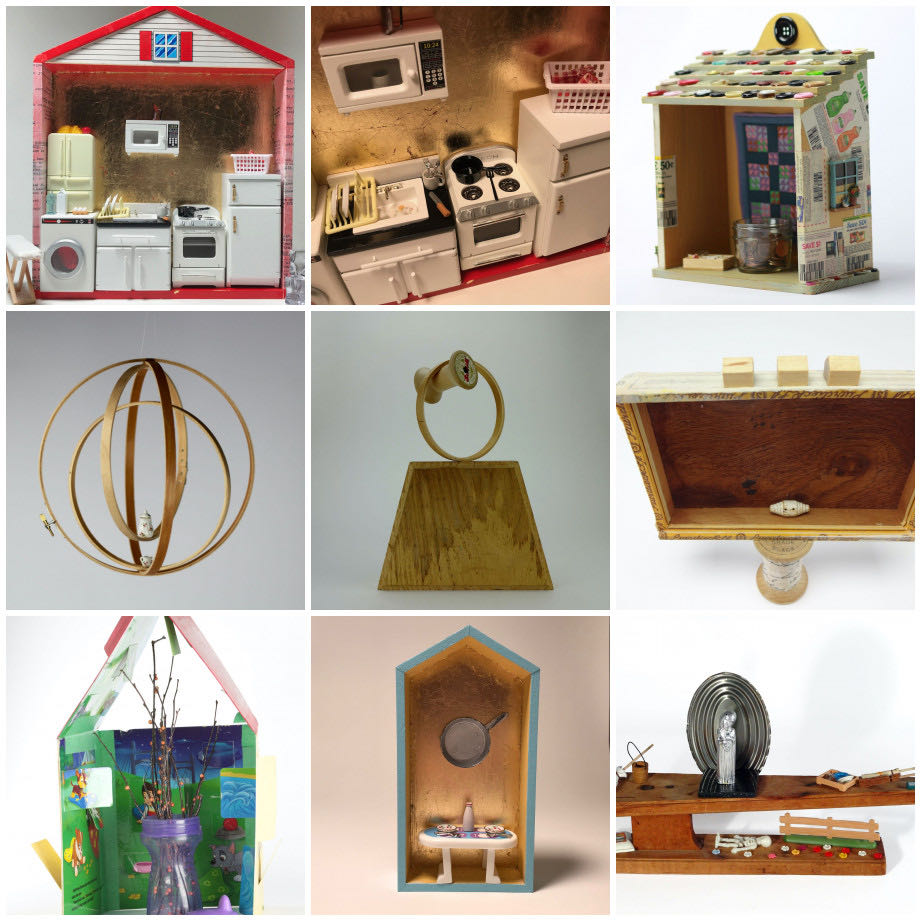 Sometimes I look at another artist’s body of work and marvel that they work in a single medium for years and years, and sometimes even in a single style. At first glance, my body of work may look diverse, as if it’s lots of little, different bodies of work, but there are many similar threads that go through all my art.

I applied for an online solo show today and you were allowed to submit 10 images of your work, to represent everything that you do. I chose the ones you see in the mosaic above, plus one more, to represent my art.

The uniting theme in all these works is motherhood, housework, loss, complaining, growth, change. That’s all one theme, right? ; ) Choice of material is another uniting theme. I work almost exclusively with found objects. Sometimes they’re genuinely “found,” like the time I found some cool looking broken glass on the ground and scooped it up into a Tic Tac container. (And of course, someone saw me do it and gave me a strange look.). Most of the time they’re collected, requested, purchased.

“My work evolves in two ways. It either starts with a theme that leads me to certain objects, or with objects that lead me to a certain theme.”

Yep. That sums it up nicely. Mostly these days I know what I want to make and a collect things on the theme. The pandemic’s making it unwise to shop in person is really cramping my assemblage style. To compensate, I’m asking friends to collect things for me, which they kindly have been, plus a little targeted eBay shopping now and then.

Back to the art. You’ll notice lots of house forms in the images above. I’ve been making art in house forms since the 1990s. In the photo above, top left is the recent work, “More Work for Mother,” and then a detail of it. I tried for ages, literally a year, to make this series work and it just wasn’t working. Then I tried shoving ALL the dollhouse appliances into one found house form and ta-da! It worked! Then I added the gold-leafing and all the dishes, food, dirty clothes and the mug in the microwave. (I never drink microwaved coffee, but the imaginary mom in this tiny house does. She’s very overworked and doesn’t even have time to make a fresh cup.)

“More Work for Mother” is about how labor saving devices end up not saving labor. Historically, they have raised standards of cleanliness and resulted in more work.

Dollhouse miniatures and specifically tea sets show up in many of my artworks, including “Precarious Tea Party 2,” in the second row. This is part of the series, Balance & Tension, which is all about the juggling that moms do, and that all of us do, in life. The center image in that row is also a B & T.

More dollhouse miniatures and Play Mobil in the center and final picture in the last row. These are another “More Work for Mother,” and “Our Lady of Perpetual Housework.” Of all the “Our Ladies,” this is the darkest one, and my favorite. The one with the skeleton, because it’s not over until you’re dead. There are also little mice in that one. You can’t see them in the picture.

Why house forms? Why religious iconography?

I attended Zoom, a crafts conference years ago, in southern Indiana. A professor (I can’t remember his name, but I’ll look for it) gave a presentation and talked about his art work, he worked exclusively using the form of trophies. For example, he has a trophy that’s against gun violence. He’s using the form of the trophy to say something. He said he uses the form of the trophy as an idiom. It doesn’t roll off the tongue, does it? But there’s no better way to say it. I’ve tried, I’ve asked for help from other wise artist friends. The conclusion is: I use shrines and house forms and quilt fragments as idioms in my work.

I use recognizable forms because I want people to understand the thing I’m trying to say. With my shrines and gold-leaf and silver-leaf and saints and iconography, I’m pointing out the contrast between the pedestal that women are allegedly on, and the drudgery that is the unappreciated lot of the mother.

In “Shrine for a Sippy Cup,” (left, bottom row) I’m recognizing the bittersweet feeling of sadness of the youngest child growing up, realizing that you’ll never be in that phase again. And that’s okay. It’s covered on the outside with quotes from other moms, things they said, or their kids said.

Are the house forms always shrines? No. I don’t know exactly what they are, other than useful, recognizable containers to indicate the domestic. Though I swear I have a life outside my house (or I did, before the pandemic), much of my art is about domestic life, or made up of the physical bits and pieces of domestic life.

But it’s not all complaining about housework. Sometimes it’s about growth and change, as with the “Sippy Cup” one mentioned above, or this one: 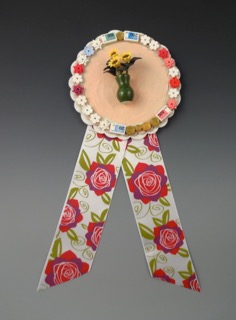 I Just Want to Buy Flowers at the Grocery Store without Thinking About How Much They Cost, Copyright Elaine Luther.

This piece, “I Just Want to Buy Flowers at the Grocery Store without Thinking About How Much They Cost,” is about, well, just what it says. About being tired of being broke. And I made it twice. This is just one version on that theme. Both are part of the series, “Medals that You Wouldn’t Want to Earn.”

Related to that feeling is this house form: 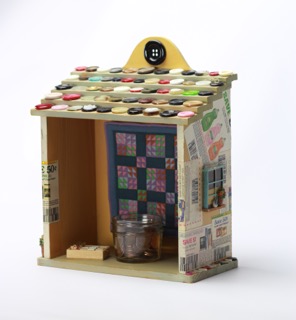 “Button House,” aka “Our Lady of Perpetual Frugality,” is about letting go of ideas that no longer serve. Recognizing that being too frugal or having an impoverished mindset isn’t helpful. This is the only one of the “Our Ladies,” that doesn’t have a physical saint in it, but to me, it’s still part of that series, like Hestia, the Greek Goddess of the home and hearth, there’s a saint in there, in a way. The small jar holds pennies.

Though I do buy new parts for my art, new embroidery hoops, boxes, dollhouse miniatures, I have a strong preference for old stuff. Stuff that’s lived. Stuff with the patina of wear on it.

In The Syntax of Objects, Tim McCreight writes,

“Objects acquire power through ownership, or in some cases, even contact. In any museum we will find objects whose importance derives from the hands that once held them – Lincoln’s buttonhook, Churchill’s cigar case.

As children, we are introduced to great-grandfather’s watch, or the Bible or compass or brooch that had been in the family. We learned that objects mark time in a unique way, a spiritual internegative. I could not hold the hand of my great-grandfather, who died before I was born, but I could hold his watch and it knew the contours of his hand. No one told me how this worked; I felt it.”

Found objects that somehow have power in them and art that retains that power.

I don’t know how to talk about that power, but Tim McCreight, again in The Syntax of Objects, does and he describes some of this.

“There is nothing so dearly loved, says the Velveteen Rabbit, as the one-eye, raw-worn, lumpy creature. There is no way to recreate that most exquisite decay except by the passage of time and attentive abuse. Objects are the canvas on which these stories are painted.”

“Objects divide themselves into categories and hierarchies. We discard the laundry slip but save the ticket stub. One plate we discard as soon as it chips, but another we’ll glue several times, keeping it hidden at the bottom of the pile, unsafe to use, but still something we are not ready to throw away.”

I admire artists who can use genuinely old stuff, and chop it up and make it their own. I am not one of those people. I tend to want to preserve the original, take a photo, make a scan, take a copy. I’m enjoying my 100 Day Project, where I’m taking photos with miniatures and my wooden spools with text fragments, because of the freedom of not gluing anything down. Nothing is committed forever, and I don’t have to lose the use of my favorite objects forever. I can keep using them again and again, while also rising to the challenge of making the photos different enough each day that people can, you know, tell that it’s a different picture.

Those are the threads that go through my work: the implied work of women, whether housework or handwork; shrines and house forms as idioms; miniaturizing and monumentalizing with scale and metallic leaf; complaints, feelings, ideas; and old stuff with the feelings still in them.