The Lost Artworks of Elaine Luther 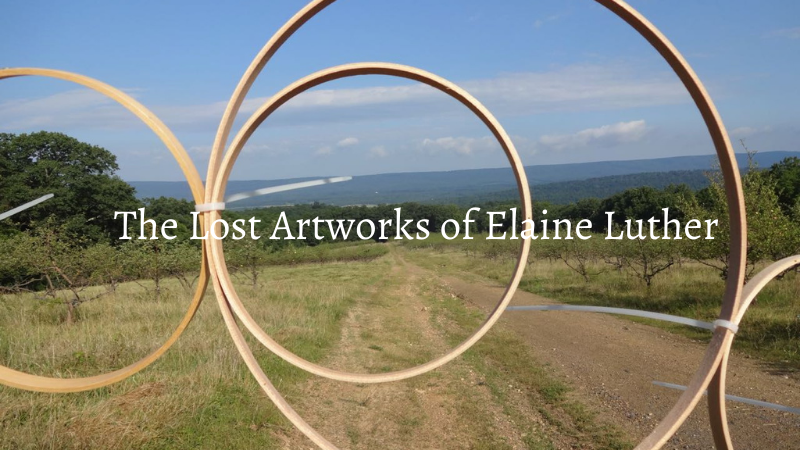 Being an artist is risky, sometimes a gallery doesn’t pack art properly and it’s damaged in shipping; sometimes artwork installed in trees is destroyed by squirrels (true story); other times the work is ephemeral and not meant to last, or the artist just doesn’t have the space to store it.

Here are some of my ephemeral works, though I didn’t necessarily intend for all of them to be ephemeral.

A few years ago, I did this really fun interactive project with a library. I built the word, EXPLORE, out of wood, that was their summer reading theme that year. Then patrons were able to come and paint the letters. Here it is before and during painting: 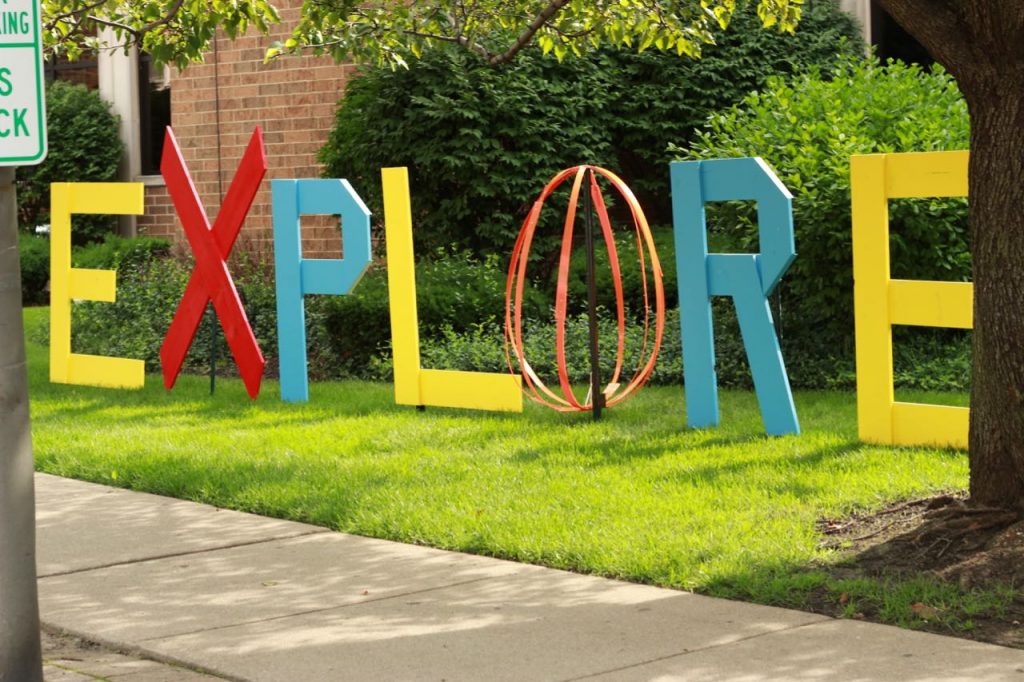 The library didn’t have a need for giant letters, after the summer, so I was able to keep the letters. I turned them into ART, and painted them with chalkboard paint. Here they are before the alley gallery walk event. ART is a little shorter than EXPLORE, they had to be cut down a little bit to be reworked. 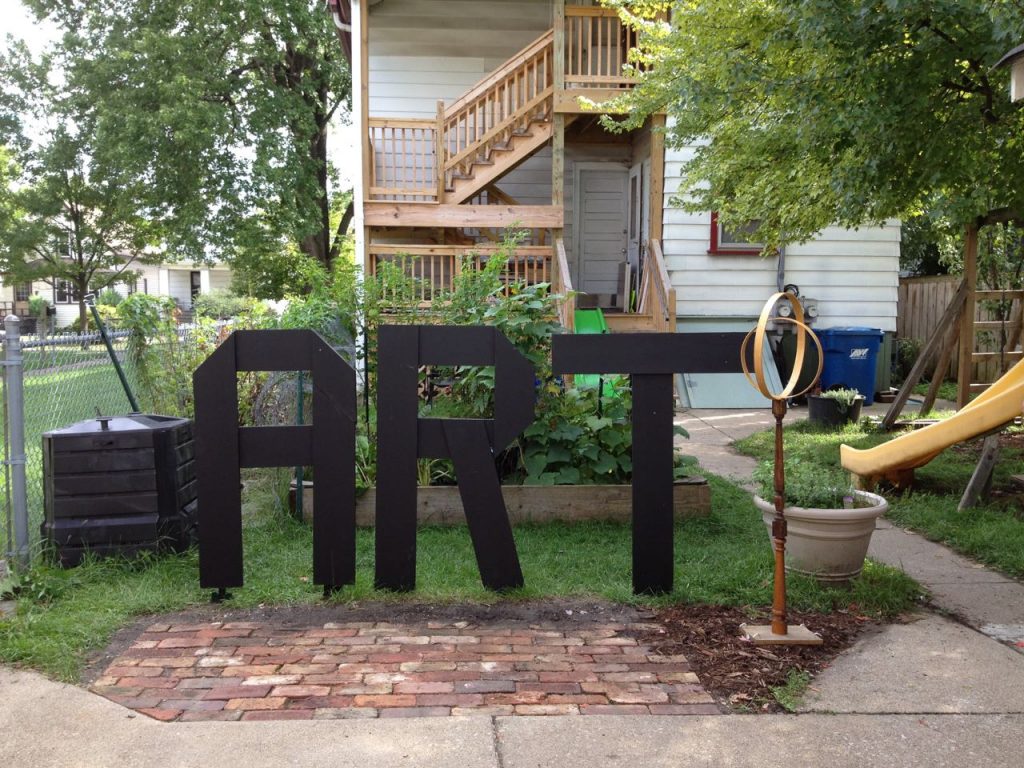 The Balance & Tension sculpture next to the ART is also gone. That was an experiment – how long would a piece made out of these materials last, if not painted with outdoor sealer? The answer turned out to be, “not long at all.” Now I use a really strong sealer.

I had a thing with giant letters for a while. This installation of LOVE was a Zenith Studios, a paper making studio in River Forest, for a Valentine’s Show. The E is itself a left over from another installation, a You Are Beautiful Installation at a store/community center, Flourish Studios, in Chicago, where each letter was made by a different artist.

The O is an embroidery hoop that belonged to the owner of Zenith, and the V, I later took apart. I still have the L and the E, in my studio. 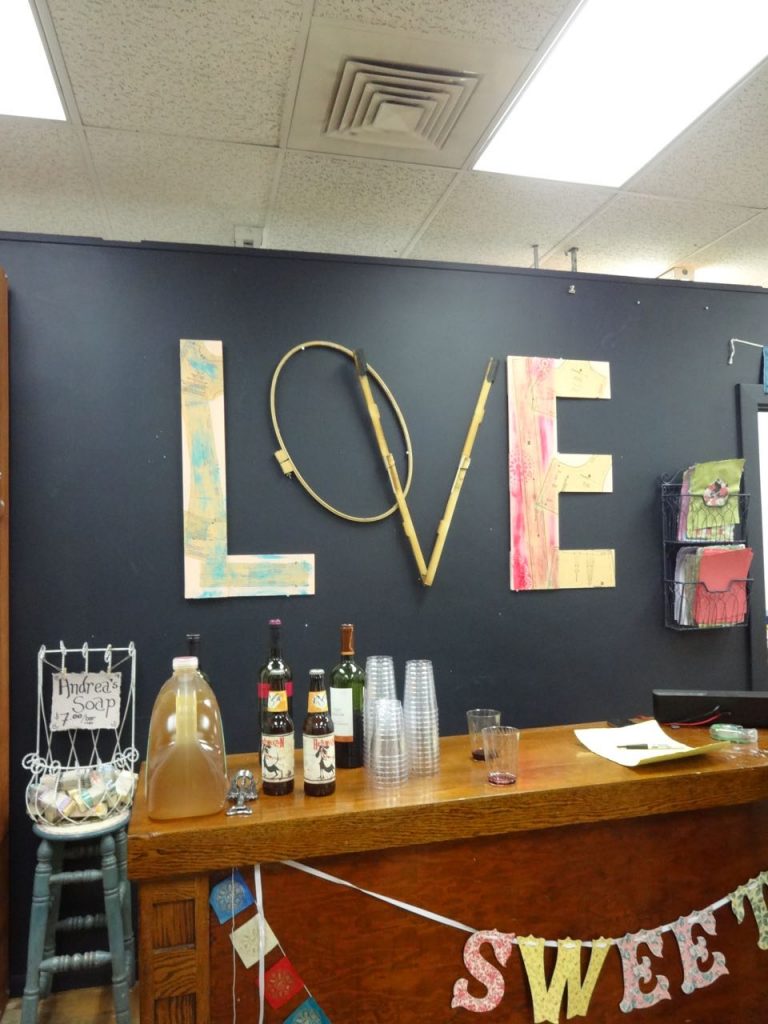 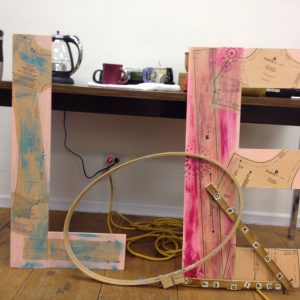 LOVE installation, by Elaine Luther, waiting to be installed.

Here’s that You Are Beautiful installation: 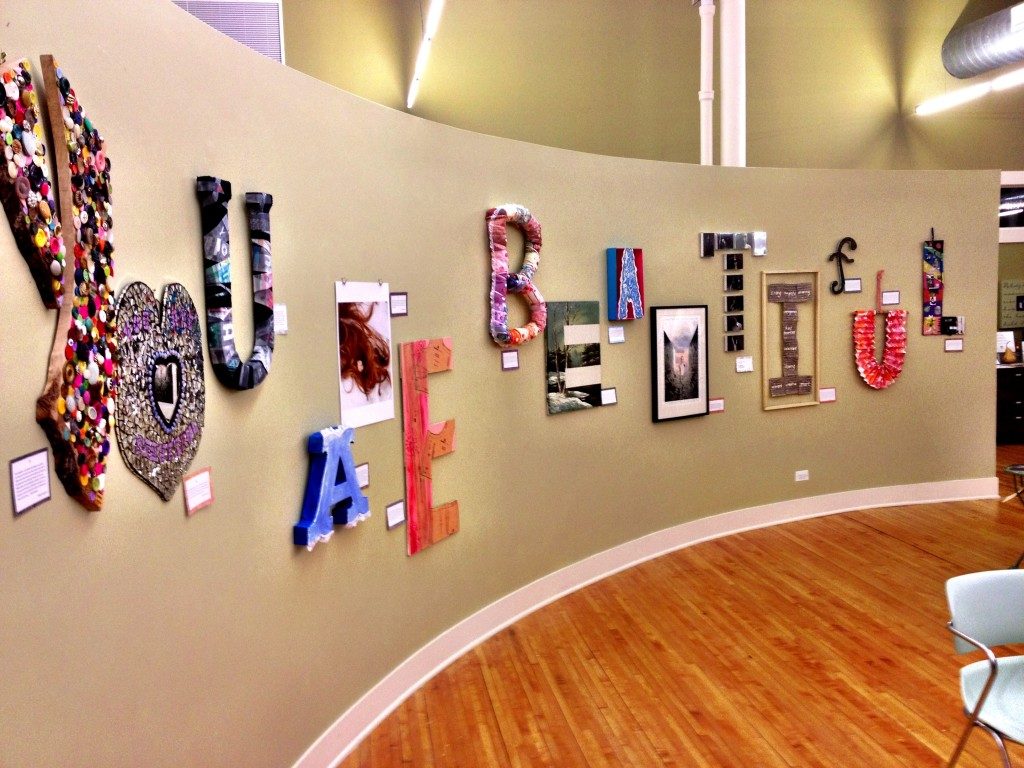 You Are Beautiful! installation at Flourish Studios, Chicago

More recently, I made this lovely, not a letter, sculpture: 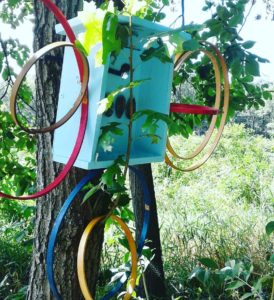 Messages of Hope Box by Elaine Luther, as installed in the Forest Preserves of Cook County, Illinois.

Messages of Hope Box by Elaine Luther, Part of the Show by Cabinet of Curiosities.

Apparently squirrels appreciate art more than we knew? This one was destroyed and carried off by animals, I’m told. Another artist in the show said she didn’t expect to get her piece back. I suppose it helps to go into some of these projects with the idea that the piece is ephemeral. Mine was built to last the ages, but alas, not the squirrels.

I’ve made a number of Day of the Dead Shrines over the years, I participated in a number of shows at the Indianapolis Art Center (IAC). Of course, El Dia de los Muertos shrines are always supposed to be ephemeral, but the Indianapolis Art Center had both an indoor show and an outdoor show. The outdoor show was of shrines inside of wooden boxes, with a clear front glued on. Not very ephemeral at all. I made two of those. One, I gave to the widow of the person being remembered. The other, I can’t remember what happened to it.

I made two indoor shrines for IAC, one was quite large and included a baby crib and a poster sized photo. Most of the parts of that one are gone. The other was a pocket shrine, made of silver. I still have that one.

The Balance & Tension series has morphed many times. While the smaller tabletop sculptures and the larger, yard installations mostly remain intact, the mobiles have been reworked or recombined a number of times. 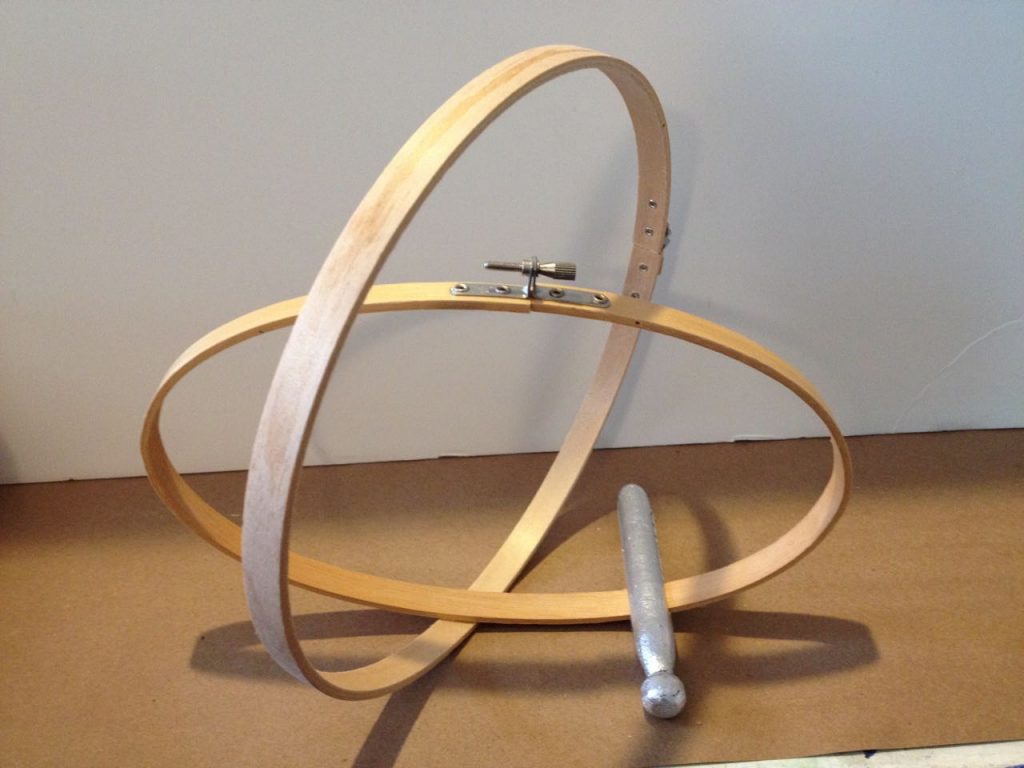 I’m pretty sure that at some point, I removed the clothes pin and this one became a mobile. I needed a lot of mobiles, because in 2017, I had to solo shows in libraries, that overlapped. Both included Balance & Tension mobiles. I made a total of about 50. 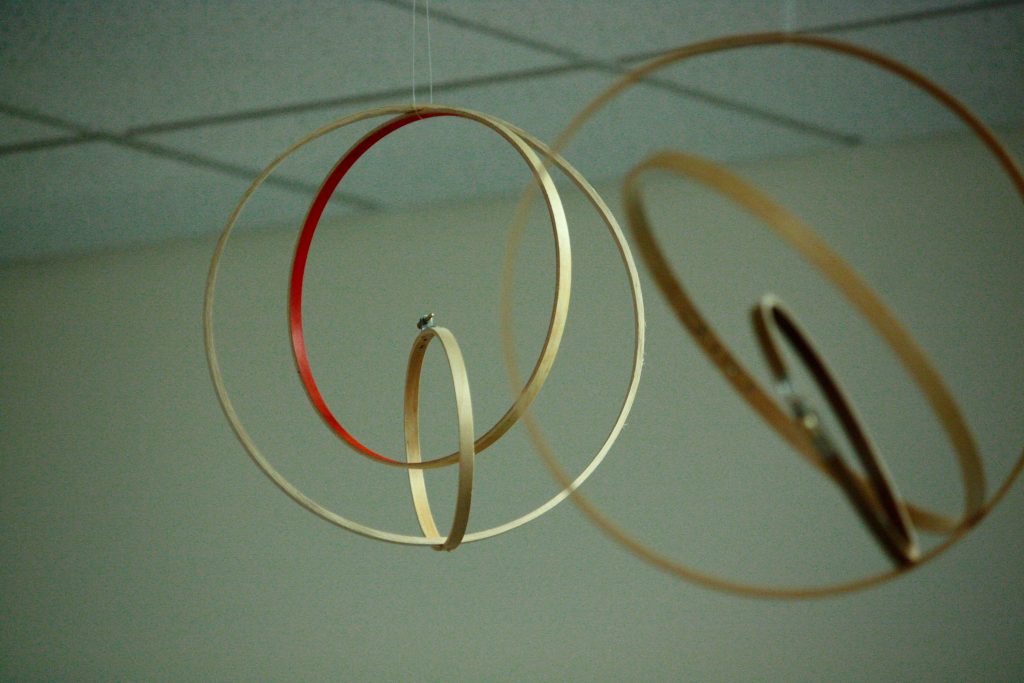 Ah, look, I found it!  There’s that same piece, turned into a mobile.  Photo from the show at the library.

Here’s the show at the Forest Park Public Library: 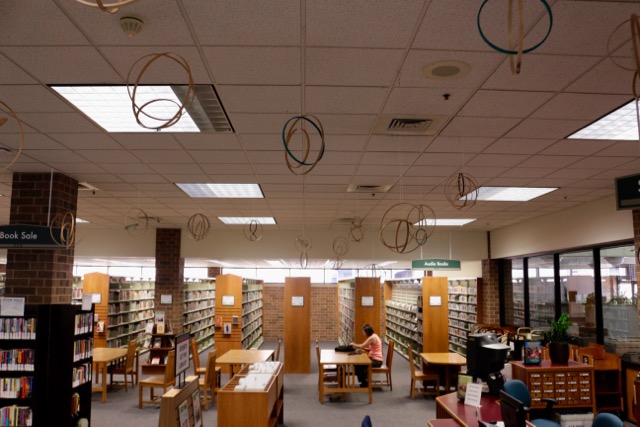 There were so many of these, that even after hanging some up in my house, giving them to friends and family, I still had more! Some of these went to The Seed, a boutique in Riverside, IL, where the owner, artist Shilin Hora collaborated with me and transformed these by adding her signature seeds. 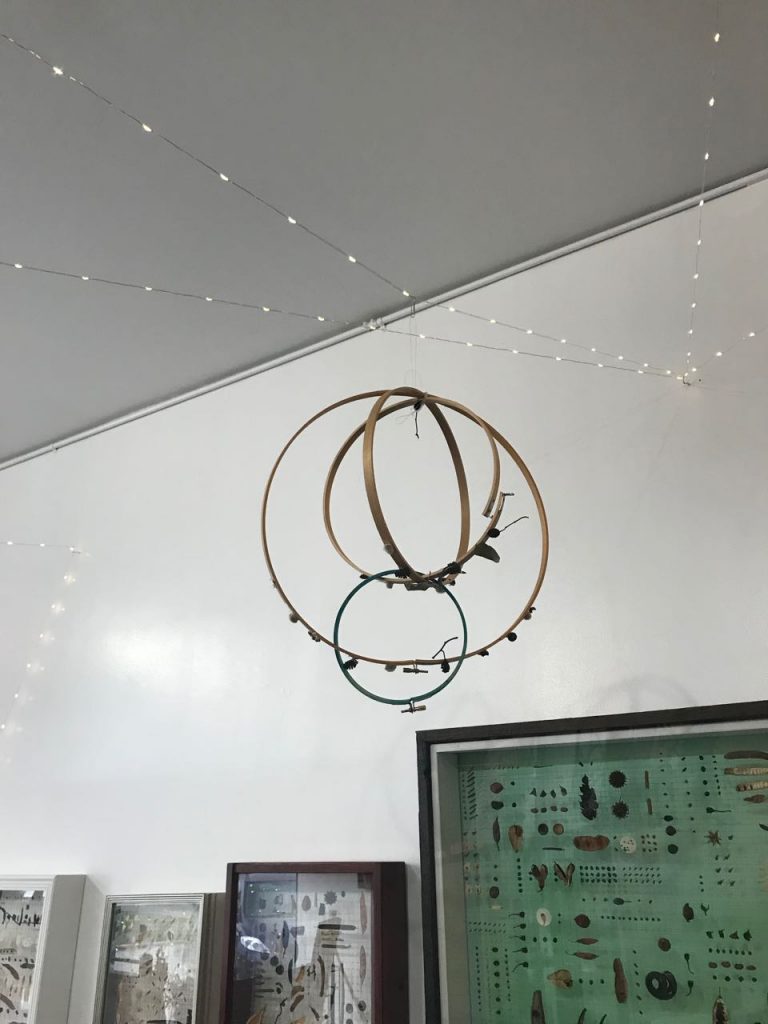 An artistic collaboration between Elaine Luther and Shilin Hora, Balance & Tension + Seeds. Shown suspended from the ceiling at The Seed boutique in Riverside, IL. 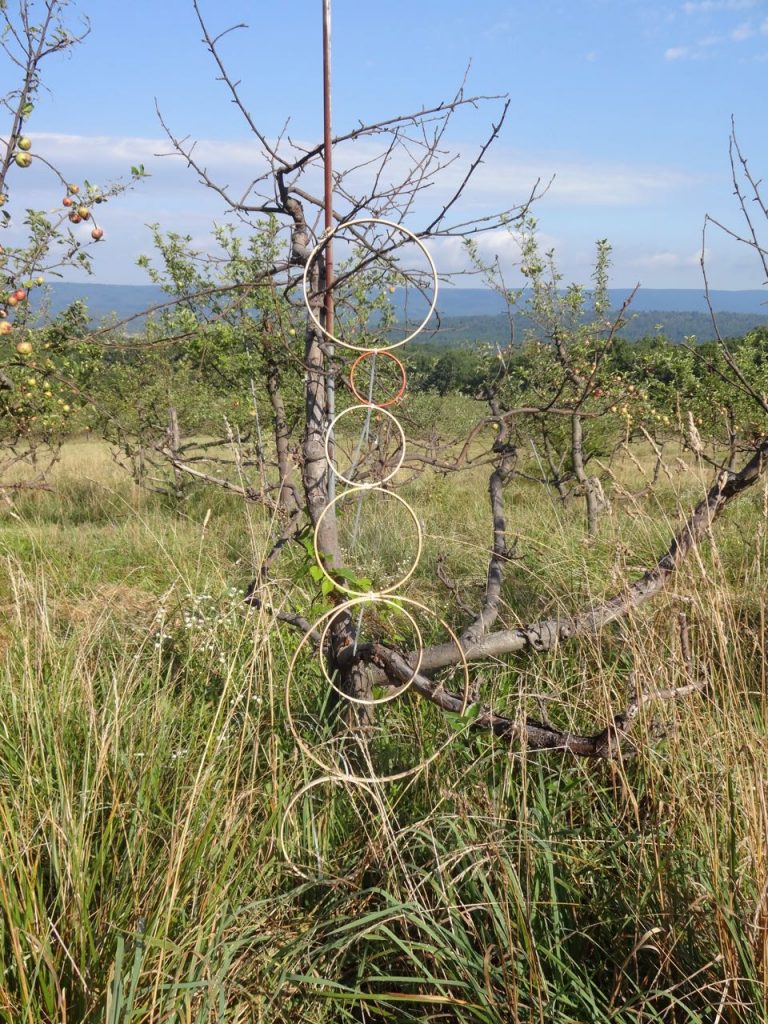 This piece, above, was intentionally left behind at an artist in residency.

I keep remembering more pieces – there was a show in 2018 of Fax Art – you entered the show by faxing in your artwork.  I faxed in a collage, that was a fun one.  That was at the Lockport gallery location of the Illinois State Museum system.

In 2017, there was a show at Governors State University called Object Poetry.  You had to pair a found object with a poem.  I paired a drinking bird – you know – those plastic birds that supposedly will keep moving forever if you give them a push, and the go down, as if to drink water, and then back up.  I paired one of those with the poem, “Keep a Goin'”. We even filmed a video where I read the poem, as the bird dipped down to the jar of water again and again.  I think we decided the video was too dorky.

Governors State U is in the Chicago area but pretty far away, so I didn’t go back to pick up the little bird.

And I haven’t even mentioned all the silver jewelry, deemed not good enough, that went to the refiner to be melted down, or the canvases painted over, given away, or even thrown away.

What about you, artist-readers? What are your lost works?