Two Photos from a Wander Through Pilsen, Part of Pilsen Derive 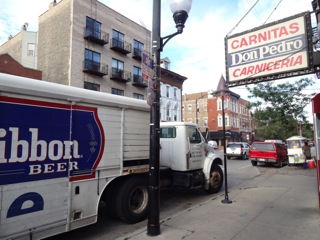 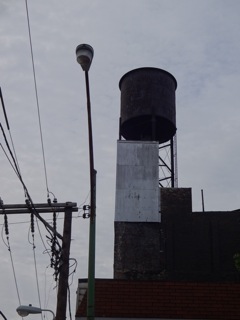 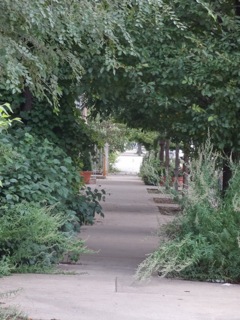 These are just two of the many photos I took while on a “drift” or wander, through Pilsen, with my wandering partner, Enid.  We were using the app Serendipitor, which tells you where to wander and what to take photos of or notice.

This instruction from the app for the second photo was to take a picture of a frame.  There were many frames that we could see from where we stood, but I went with this unexpected one created by plants.

We’re part of the Pilsen Derive project led by Amanda Gutierrez at the UIC Maker Space.

Everyone in the project has a connection to the Pilsen neighborhood, many of the participants are both Mexican American and live in Pilsen.  There are just a few white people, I think all of them live in Pilsen except me, though I’ve lived there before.

For those of you outside the Chicago area, Pilsen is a Mexican-American neighborhood experiencing gentrification.  Before it was Mexican it was inhabited by Bohemians, as in people from Bohemia.  There are still traces of that in the neighborhood.

That UIC, the University of Illinois at Chicago, is sponsoring the project is ironic, given their origins in the destruction of the Italian neighborhood, the rubble of which is underneath it.

More recently, UIC used imminent domain to take most of the Maxwell Street area, and caused the Maxwell Street Market to move.  That neighborhood borders Pilsen.  I’m not sure exactly where Pilsen begins.  I’m thinking that it begins on the north end at the raised train tracks.  I’ll find that out.

Enid and I observed a vacant, fenced lot just south of the tracks.  She asked me, “what you think that should be?”  She says a park, that there aren’t enough parks in the neighborhood.

I said “I don’t care what it is, as long as UIC doesn’t decide.”  I bet UIC does own that tract of land and does have plans for it.  They have a history of buying or taking land, fencing it off for a long time and then building.  I wonder how we could find out who owns it?

In addition to wanders and photos, that kind of question is part of the project, seeking answers and interviewing people.

A question came up for me about Pod Mazersky, a landlord in Pilsen who owns what seems like half the neighborhood.  I put the question to Curious City, a bit they do on our local NPR station, WBEZ.  Hopefully my question will make the cut!  I asked, among other things, are there any other neighborhoods in Chicago that have a single owner who owns so much?

Here’s a photo that I took that I think perfectly sums up the changing neighborhood:

Learn more about the Pilsen Derive project, and its influences, including dada, on their tumblr: http://pilsenderive.tumblr.com

There will be one or more exhibitions of the work the group creates, I’ll keep you posted!