Unknown Collaborators and Copyrights Not Abandoned 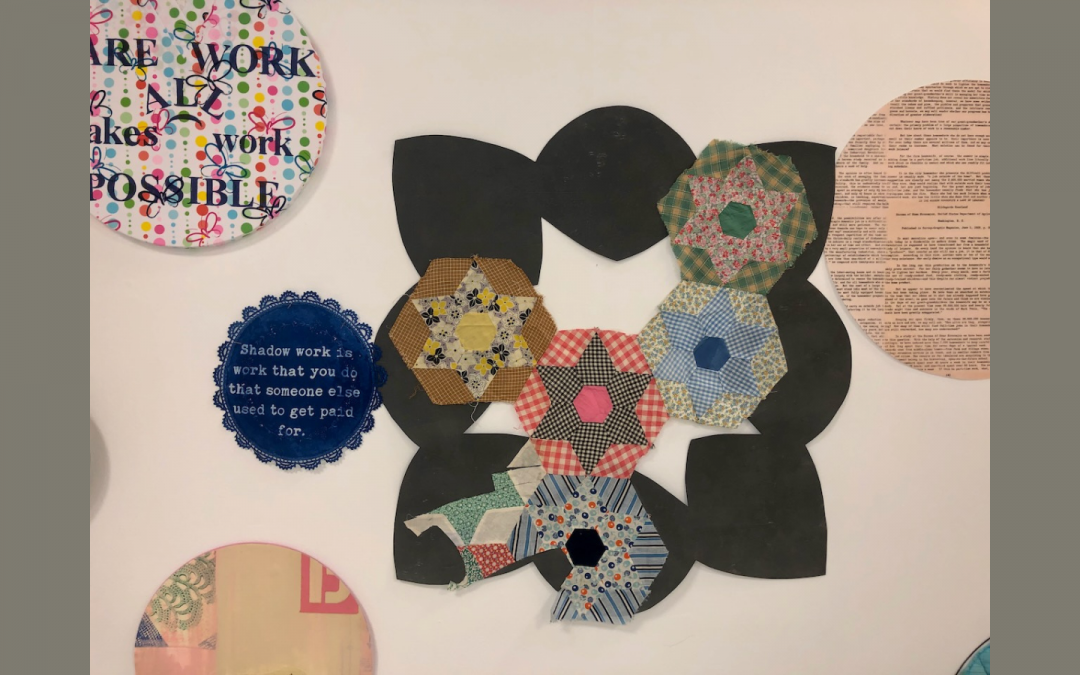 I work with a lot of so-called “found objects” in my art. But really they’re not found so much as sought out, purchased, thrifted and gifted to me. Part of the fun is the thrill of the hunt.

I usually have no idea who made the quilt blocks, doilies with crocheted edges, cross stitched table clothes or completed or incomplete craft projects that I acquire, and that’s the point. She’s unknown, her work is uncredited and unsigned. Her family donated/sold/disposed of her work, because, well, they didn’t have a use for it. They don’t use cloth hankies, or doilies, or the quilt was wearing out, or they don’t have the skills to finish a quilt top. Or the items came down to them and they have a complicated relationship, or no relationship, with the maker, so they let it go.

Labor as a Topic in my Art

Much of my art is about labor. Why? Because I’m in the position of providing lots of unpaid labor, at great benefit to society, and at great personal cost to me.  (Just stating the facts.)

What labor is that? Raising children, mostly. You could say that I chose to exit full time work in order to raise children, but was it really a choice? Full time child care is now an average of $24,000.00 a year for one child, $48,000.00 for two. I don’t know what it cost when my children were little, but I know for sure that I could not afford it.

This is just the math bit, not even getting into talking about whether I would have been willing/able to leave my babies at 6 weeks. Whether my workplace would have supported pumping so that I could continue to breastfeed.

Women in the U.S. are made to feel that childcare is a personal problem for them to solve individually, when really it’s a societal problem. I think we’re the only developed nation that doesn’t subsidize childcare at all (except perhaps with Preschool for All, which doesn’t start until age 3?).

Many countries have this habit of going, “Oh crap, we need more workers!” and then try to throw small amounts of cash at women to encourage them to have more babies, when really, a full system of support for women and young families is what’s missing. (Most recently, I read about this happening in South Korea, where the governments efforts are completely failing.)

So, I make art about labor and unpaid labor, because I make art about my life and big part of my life is unpaid labor. Of course, being a mother who-has-always-worked-part-time-for-wages in addition to my unpaid work means, well, that I’ve paid a very high price for motherhood. It’s also what allows me to be a full time artist. (Yes, that’s two full time jobs, I know.)

I knew moms in my early play groups who paid a lot of money to keep up their professional licenses and and work relatively small numbers of hours, just to keep their skills up. It seemed like a lot of effort and not sensible to me at the time, but as their kids went to school, they were able to relatively seamlessly transition back into full time employment.

They had had their kids at an older age than I had, had gone to grad school, and were more established in their careers than I was.

I don’t regret my choices, even the ones that weren’t really choices, but the only available option, given lack of government or societal support for childcare and young families. The rant could go on, but you see now why I want to talk about labor all the time in my art.

Years ago, I complained about housework in my shrines, the Our Ladies of Perpetual Housework. More recently I made More Work for Mother and Time Cards for Mothers, which led into the Clocking in for Unpaid Labor Project. The timecards project goes beyond mothering and caregiving and includes all kinds of labor done by all genders.

Okay, where was I? We were going to talk about copyright and unknown collaborators.

The handwork objects that I buy or am given stand in for women’s labor. The hankies, doilies, and cross stitched table cloths that people donate because they don’t appreciate them – that’s a perfect metaphor for women’s labor, which goes un-noticed and is under-appreciated.

I have a weird fondness for unfinished projects, but no desire to finish them, as some artists do. I have a general guideline that I never un-do their work, only add to it. I made a quilt top from blocks made by two different, unconnected to each other, unknown makers. I had to add a couple of blocks and stripes to make it work, but that’s all I did, in addition to assembling the quilt top. (It’s still not finished as a quilt.)

By using these bits in my art, I’m breathing new life into them, or getting people to look at them in a new way. No one likes doilies, but when I printed them as photograms, with blue dye, they became interesting and beautiful. 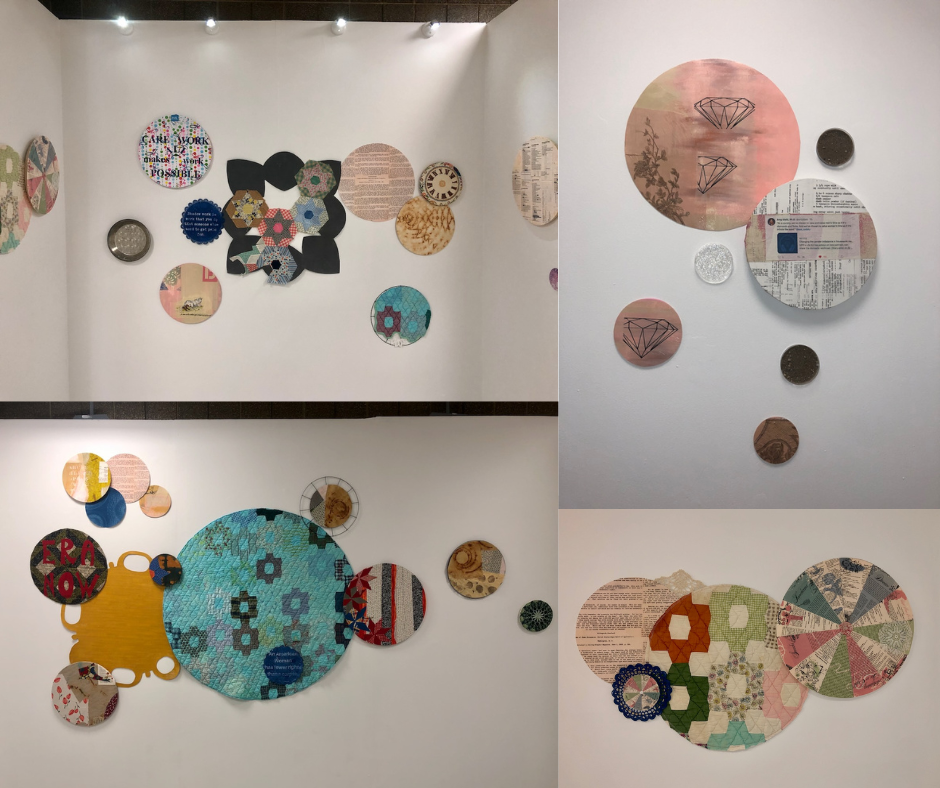 In my current solo show, at the Backspace Gallery at Northern Illinois University, almost everything is a circle and I’ve used found handwork in the form of a cutter quilt, embroidery, yo-yos and more. I’ve used my own work; I cut up older collage paintings on canvas, as well as my own quilted textile collages. 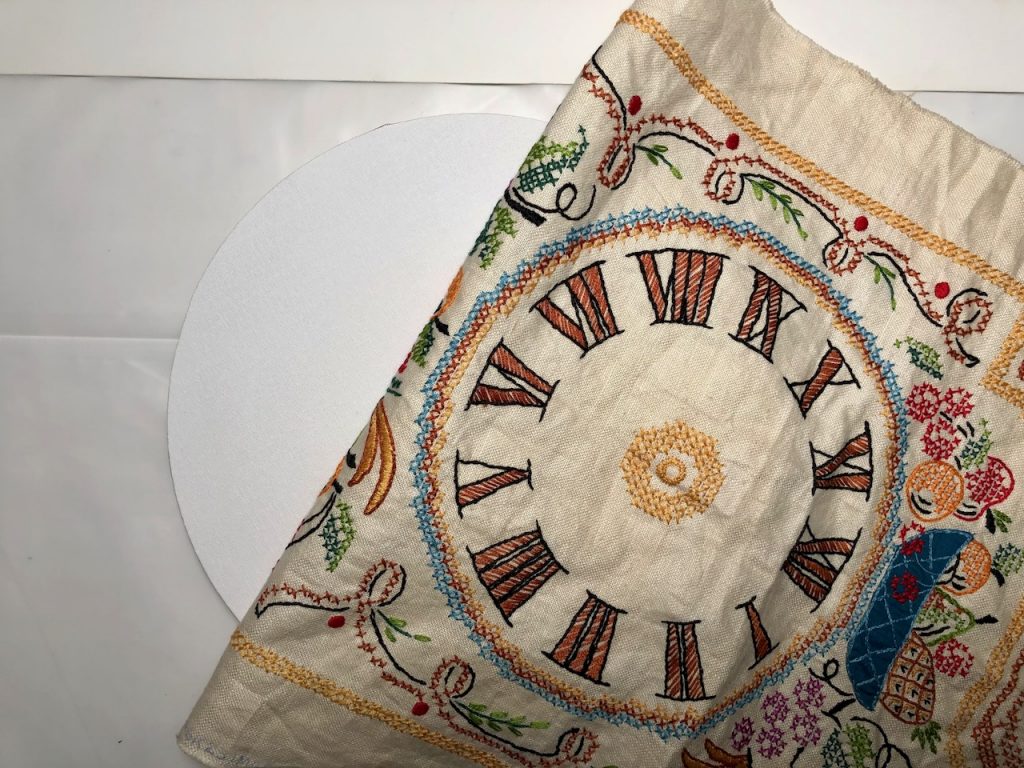 Embroidery of a clock shown next to a round canvas that it would later be mounted on. Pattern is by Paragon.

One of the pieces in this show is an embroidered clock. And though I know where I bought this particular piece, I don’t know who did the stitching. I do know, however, who made the pattern. I usually don’t have this information, but this time it was printed right on the edge of the fabric. I took a picture, to document it before I cut the piece into a circle and mounted it on a canvas. 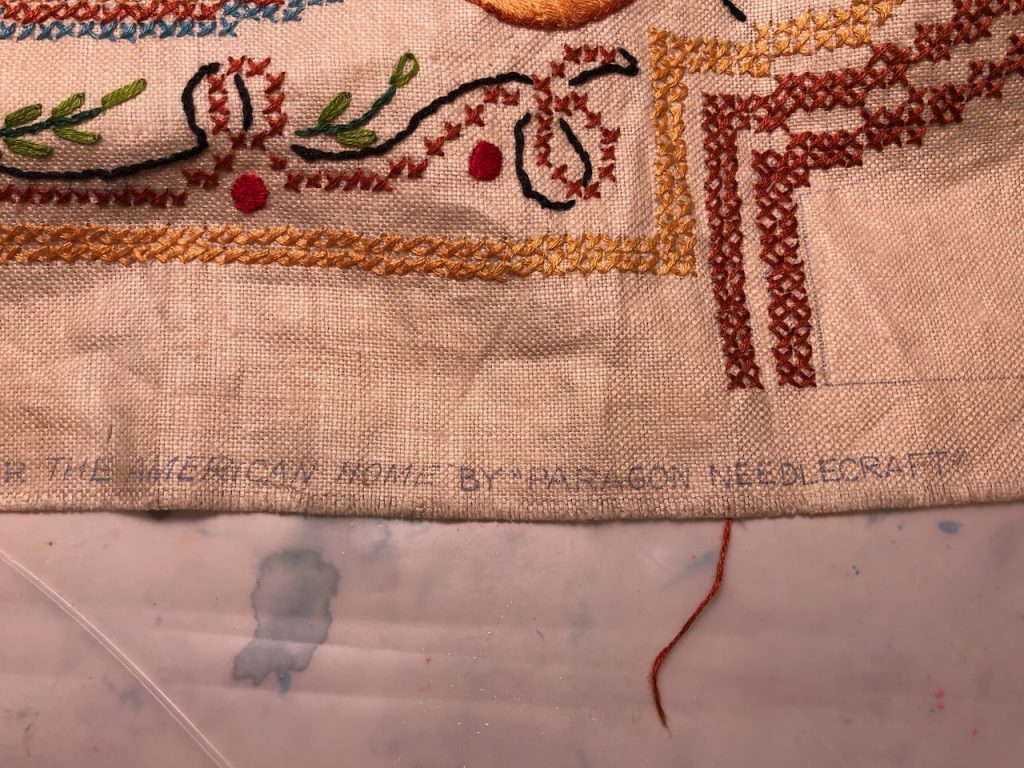 Detail photo of edge of embroidered fabric that says “Paragon.”

The creator of the pattern was Paragon, a company that sold patterns at J.C. Penny, among other places, in the 1970s and 1980s, and I bet you’d recognize some of their patterns, even if you’re not a stitcher! I did!

We had this one in our house for a while when I was a kid, it was a gift: 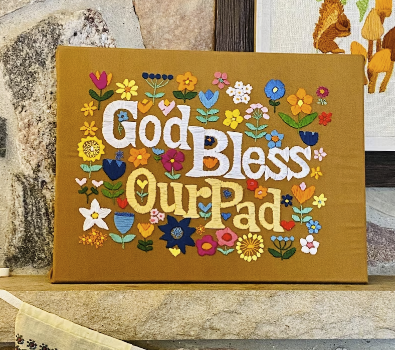 In trying to learn more about the Paragon company, I found this blog post:

Did you know that J C Penny once sold embroidery kits?

with this charming quote: 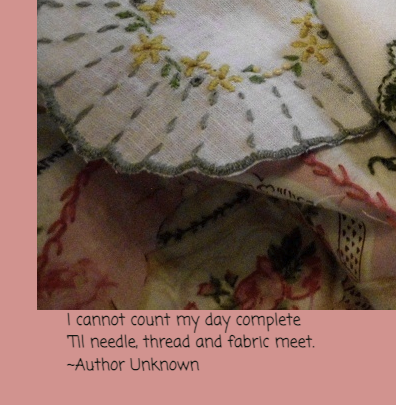 I then found a pattern for the “God Bless Our Pad” for sale as a digital download on Etsy, which is surely a violation of copyright. Yes, the original Paragon company is gone, they went bankrupt, but they were re-formed and sold. Most likely, the new company acquired all of their assets, including their intellectual property, or patterns.

I asked a lawyer once – maybe at the Self-Employment in the Arts Conference – about working with found photos in art. I had made the faulty assumption that if the physical objects were abandoned by the original owner that the photos were – I don’t know – public domain or something. The lawyer said no, you don’t abandon your copyright just because you’ve abandoned the photos, the painting, the physical object.

I stopped using found photos in my art. (I like to be ready for licensing deals, at any moment. Not that there are any on offer, but just in case, I try to make every element in my art work totally free and clear, copyright-wise, so that it could be licensed.)

I try very hard not to violate other people’s and companies copyright.  By tracking down the Paragon Company, just a little, and drawing attention to who made the pattern for the clock piece, I want to draw attention to it, that this little bit, we can know, we can place it in time.  Unknown maker, known pattern maker.

Back to those unknown collaborators – a symbol of how un-valued this handwork is that I can afford it as an art material.  And I have a lot still to use in my studio!

There was a lovely piece recently in the Washington Post, one of those illustrations and writing pieces, about women’s crafts and how they’re not valued.  The author wrote:

“I began to wonder: How much talent has gone uncelebrated because we feel entitled to women’s work?”

Boom!  I’d never thought about it that way, but whew!  She’s right.

Here’s the title, author, and link to the piece.  It’s probably behind a paywall, sorry about that. 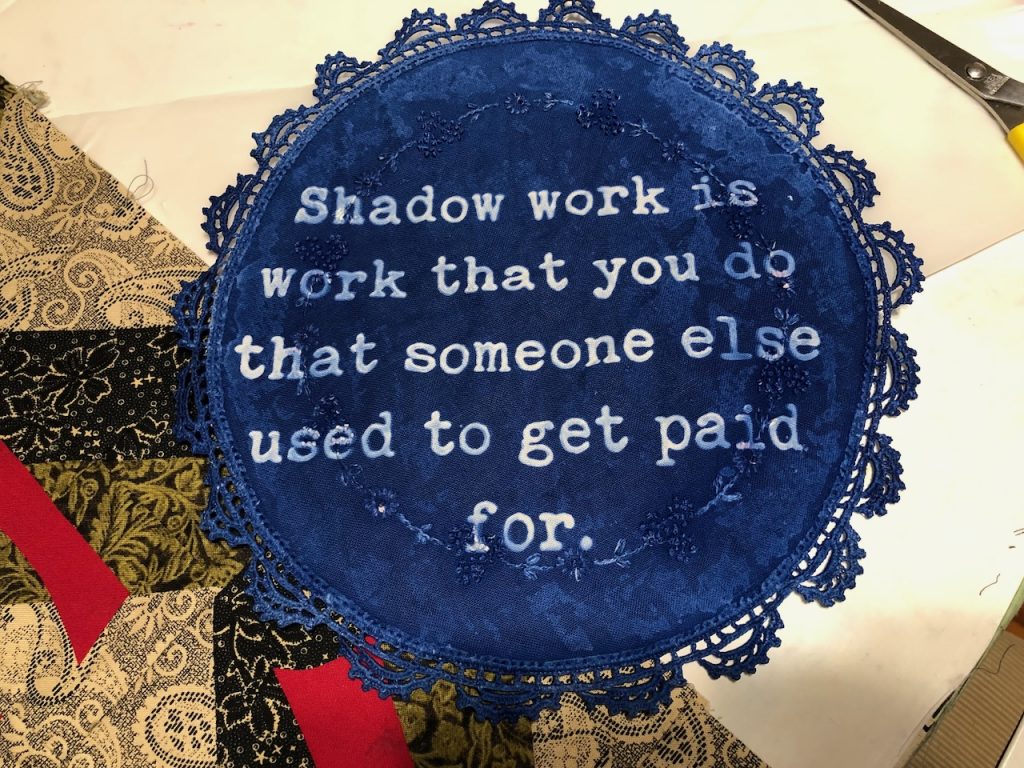 Doily printed by Elaine Luther in blue and white says, “Shadow work is work that you do that someone else used to get paid for.”

There you have it.  What kinds of found materials I work with and why.  A student at NIU asked me if I find the object first or have the idea first.  In the past, I would have said, both/either, and that’s still true.  But it’s also true that, at least for now, the scope of what I collect has narrowed.  I answered that these days I’m more likely to collect these things that are interesting me – abandoned handwork – and then adding my own words/quotes/imagery, as in the photo above.  Older bodies of work, such as the Our Ladies of Perpetual Housework and the Medals that You Wouldn’t Want to Earn, those were very specific ideas, drawn out in a sketchbook, and then the objects made or tracked down.

For example, for my most recent Medal, Medal for an Exhausted Empath, I need an ear and I had custom ribbon printed that says, “Exhausted Empath.”  Most of the other elements I already had. 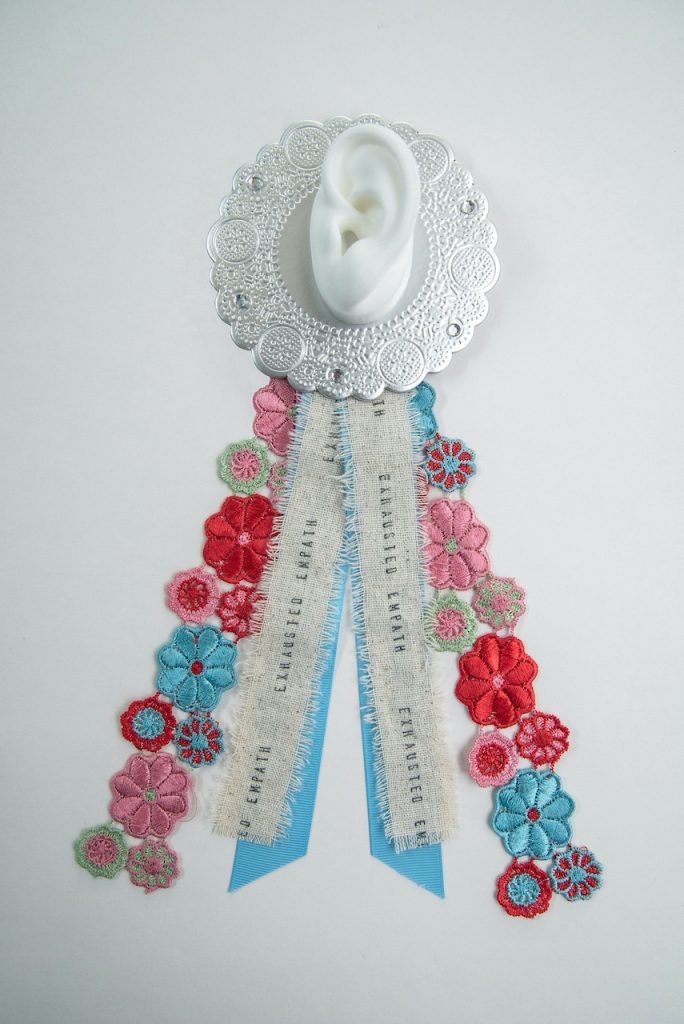 The Art about Diamonds and Sand

Let’s look at one more piece from the NIU show. 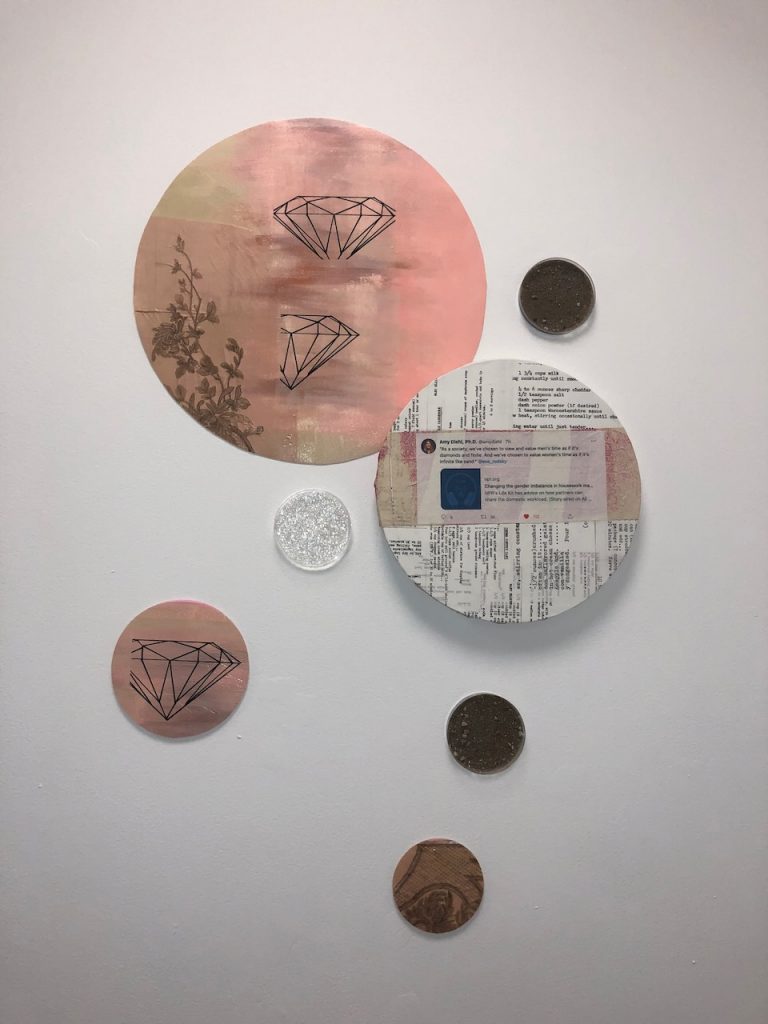 A grouping was inspired by a tweet, because of the quote referenced in the caption above.  The quote was said by Eve Rodsky.  I happened to have an old collage painting with these diamonds on them.  I cut the painting into circles, and added the work on canvas with the tweet, and the Petri dishes that I filled  full of cubic zirconias (CZs) and sand.  (I had the Petri dishes in my studio already, of course.  I asked around for sand and ordered a bunch of CZs.)

You can hear the NPR story that this quote is from here:

P.S.  I hope this post is clear.  I was recently on a panel about domestic labor, at a conference for academics, called SECAC.  The panel was called Work, Work, Work: Domestic Labor in Art History and the Studio.  The panel chair was Crystal Brown.

Attending three panels at SECAC on domestic labor or motherhood in art, have me thinking about these topics even more than usual.

To see the bodies of artwork referenced in this post, please see the Portfolio tab, here:

And/or search the blog for more posts about those works, since the Portfolio page is overdue for an update.