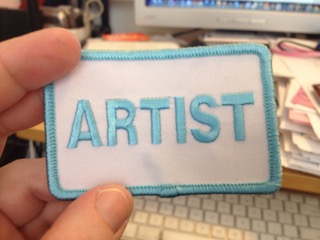 It’s part of my job as an artist to connect the dots in my art work. One pattern that’s been emerging is this theme of making art that you can wear.

Here are some images of the wearable art. 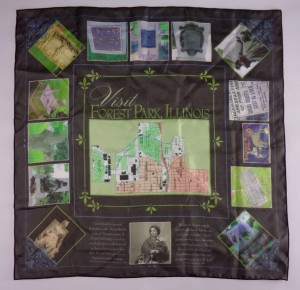 This is local history scarf, made in the style of a souvenir scarf of the ’60s and ’70s, which tells the story of The Death of Cleopatra, by Edmonia Lewis, as well as a few other stories. 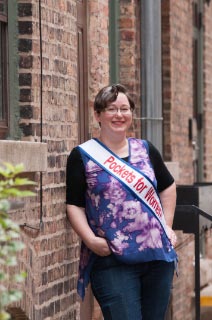 This is my activist piece, in which I campaign for the right to descent pockets in regular, affordable clothing for women.

I had the sash made by the same company that makes them for one of the biggest pageants. It is really gorgeous. 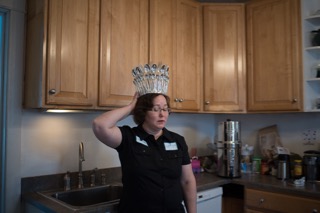 I made the Spoon Crown for this photo shoot, and also had the patches made that are on my work shirt. One says Artist, one says Mother. Here’s a close up of the Artist patch:

What I’m doing here is working with clothing and its meanings. Sashes can be worn for beauty pageants, but they were also worn in marches by the suffragists, which is the reference I’m going for here.

With the work shirt, I’ve added name patches with my two jobs: artist and mother, to point out and remind that they are both work, really work, even if society undervalues them, while also paying plenty of lip service to each of those.

I’m working with these ideas of what the clothing represents, the femininity (crowns and sashes) or masculinity (work shirts, perhaps) to express some ideas about motherhood and what it is to be a woman in this society.

The crown is a little complex. It’s an off shoot for a photo series that is still in progress.

I’ve crowned myself, yes, I’m the Queen of the Kitchen, but what is that? It’s queen of nothing.

There’s a phrase in Spanish, “Reina de los sapos” or Queen of the Frogs. If I understand the phrase correctly, it’s an insult to say that a woman thinks she’s such a queen, but she’s just the queen of the frogs.

I’m wearing a crown, yes, but it’s also this ridiculous thing, inspired by a tv show (POINTS! if you can name the show), made of spoons and forks.

And of course, the crown lies heavy.

There’s more wearable art in the pipeline, either things you could actually buy and wear, or pieces that exist primarily as props for photographs.

There’s also a necklace that’s part of this grouping of wearable art. It’s called The Prizes of Womanhood. (I’ll add an image soon, I have to track it down…)

And of course, my Medals that You Wouldn’t Want to Earn are also wearable, or at least they look like they are. (Some have pin backs, a couple do not, since they’re not really intended to be worn.)

Is there more there? Are there more connections to be made? What do you see?