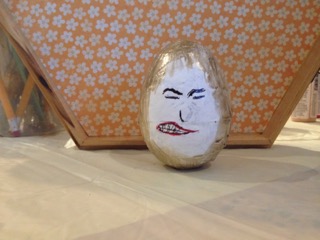 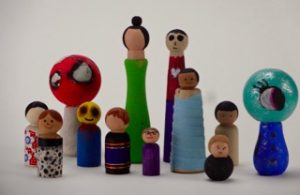 Japanese Dolls Samples by Elaine Luther and others

These are kokeshi, a Japanese folk doll that uses scrap wood turnings to make simple dolls that don’t have separate arms and legs, they’re a simple body and head. In the photo above are some samples that my kids and I made and one that a student gave me (the adorable baby one there).

We did these in class at day camp and as part of a whole class I did in a healthcare setting where I teach.

Here are some adorable families from day camp: 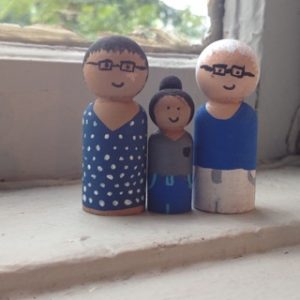 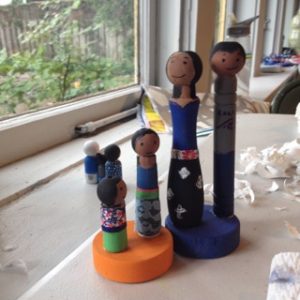 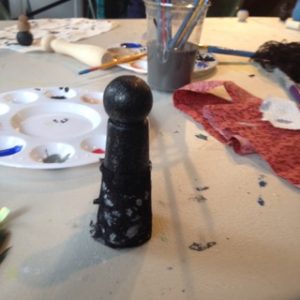 She didn’t set out to make a doll of Death, but it turned out that way, so she went with it! Later a fabulous hat was added, but that picture didn’t turn out.

Over at the healthcare center, we made kokeshi and daruma dolls, which are these egg shaped creatures, sometimes painted to look like the founder of Zen Buddhism, and because he has achieved enlightenment, you cannot knock him down.

Here’s my sample, made in the traditional style, plus a blank one showing the under the surface bits. 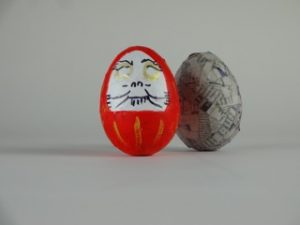 Why doesn’t he have any pupils? There’s a tradition where you draw in one pupil as you set your goal, and then when you achieve the goal, you draw in the other pupil. He is supposed to look fierce, which makes sense, since you need fierceness to achieve your goals, to establish and maintain boundaries and do the work.

Here’s a group of them by a student: 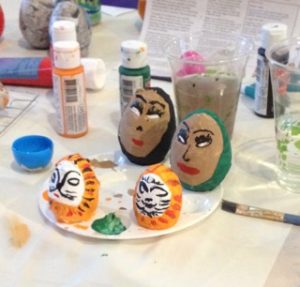 This guy has a face on each side. She drew on the features as inspired by the various lumps and bumps of the papier maché under the paint. So much personality! 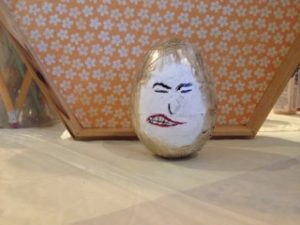 My Daruma Doll by Student.

And finally, we made kimono dolls, or bookmark dolls! Here’s just one image of a student’s work: 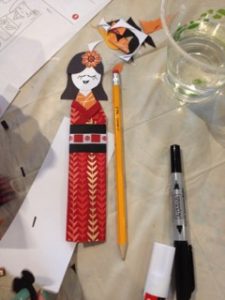 These are fun and easy once you get the hang of it! Here’s a good tutorial for how to make them:

Which of these three projects do you want to make the most? Does one of them call to you? Post a comment, or message me, and let me know which one!