Interview with the artist: Melonie Mulkey This year, each artist who has a solo show in the Angelica Kauffman Gallery also has a mini-interview on Instagram. Because of the character limits on Instagram, I divide these interviews into one or two parts. Here’s the first one I’m post in full here, with photographer Melonie Mulkey!  Her show is called “On the Inside,” and was up during February 2022. Q: I see you’ve been working with dollhouse interiors since 2017 and that your work has changed over time. Earlier works had little figures in them, and now those are gone, tell me about that choice. Do you also have a photography practice of full sized work?

A: I have been interested in interiors as long as I can remember. When I was a kid I used to make collages that depicted different interiors I would construct from magazines. Around 2014-2015 I started to create life-sized installations depicting owners and their collections within their interior environment. This way of working came from my sculptural background prior and thinking more about my interest in set design. I made figures built out of chicken wire covered in printed photographs. The photographs creating the figures in the scenes were patterns and colors from the actual sets themselves resulting in the figure blending into the environment. I was very inspired by artists like Liu Bolin and Sandy Skoglund at the time. I continued to use the figure (usually a printout or cut out not a live model) until 2017 and decided to focus more on the space itself and the way that light, color, and architectural signifiers could construct a narrative on their own. This for me allowed for the work to open up and give the viewer a chance to navigate the interiors for themselves without the distraction of the human form. Currently, I am starting to use the figure again but depicted through shadows or framed photographs in the space. I do not have plans to create life-sized work anytime soon! 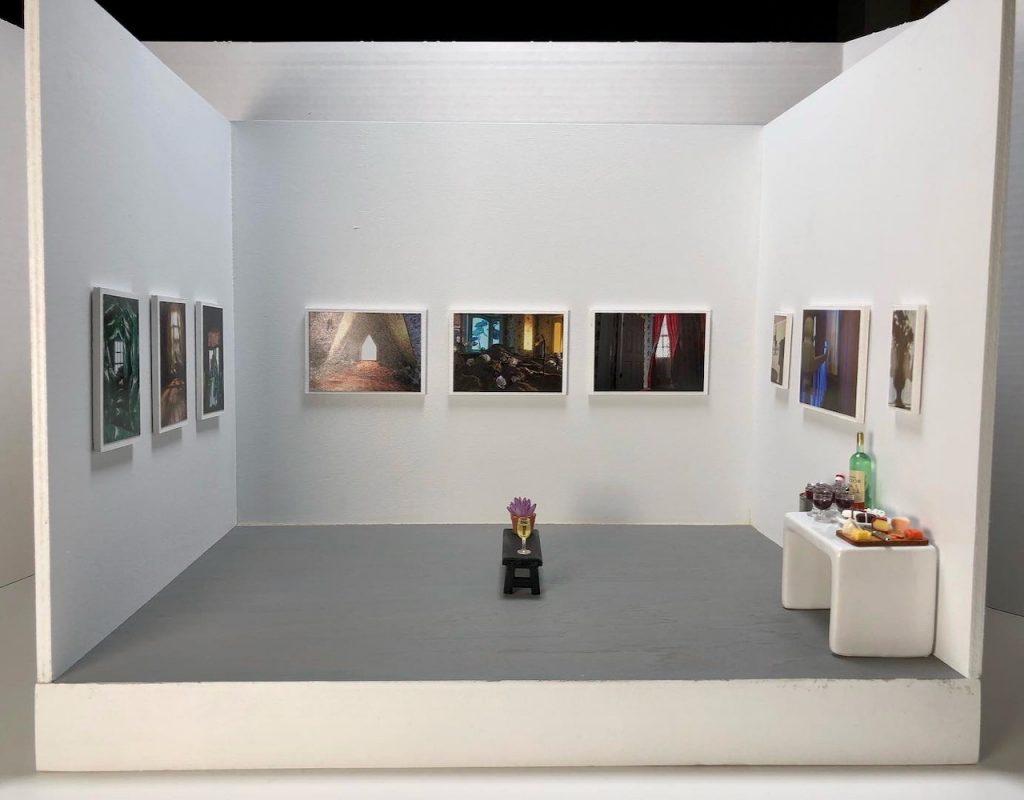 Q: What originally drew you to working with dollhouse interiors? How many dollhouses do you have? Is it just one that you change up?

A: When I started my MFA at Notre Dame in 2016, I was still working life-sized and it was during my first semester as a grad student that I started to work in miniature. I started researching psychologists like Jean Piaget and the stages of child play surrounding the dollhouse. After some time and some digging, I found a psychologist Edwin Shneidman, who created a series of tests called MAPS (Make-A-Picture-Story) tests. These were psychological projection tests and were made out of 21, 8.5 x 11 background cards depicting structured scenes such as living room, bathroom, bedroom, cellar, attic, nursery, and exterior images as well. The tests also came with 67 figures.

Now, this was not a dollhouse and was not just for children either. These tests were held in a wooden suitcase and the patients of Schneidman’s would select backgrounds and figures and create scenes that would then reveal something about the patient’s history or memories associated with the space and people in it. The arrangement and selection would then lead Dr. Schneidman to further conclude his diagnosis. I found this to be incredibly interesting and so the first series I made in 2017, “Under One Roof,” in miniature was very inspired by these tests, and for all the cut-out figures, I staged and lit myself in the studio and then inserted them into the set before taking the final photograph.

All of my work in miniature up until this series in the exhibition is not made using dollhouses and is all custom built by me using materials like drywall, wood, etc to create the illusion of a room but built only for the camera. Dollhouse-sized rooms are actually too small for me and my camera, so I tend to build custom sets and then use 1:12 scale dollhouse-like props within the rooms I build. I do not save any of my sets, and take everything down once I have completed the photograph. I do save certain walls or props I make, but I do not reuse any of the spaces.

The work in the show is the first body of work to use actual dollhouses and was important to this series during the pandemic and the idea of wanting to collaborate with the history of the spaces other people had created. That being said, for this project in the show, “On the Inside,” I used a total of five dollhouses that I purchased from people selling them on the Facebook Marketplace, and tried to photograph all the rooms in each one to make this series. I have since put all but two dollhouses back into the world for someone else, and I may try to create a video project in one in the future.